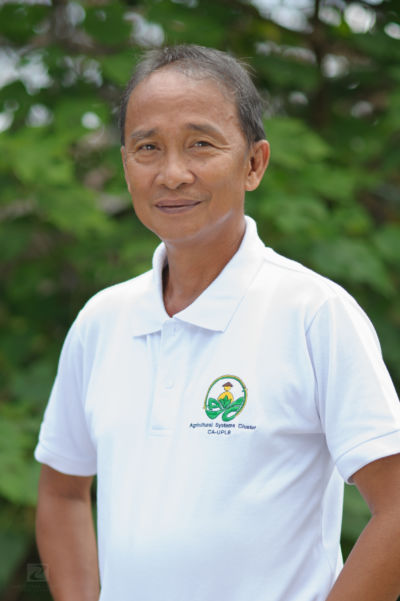 Dr. Virgilio T. Villancio is the newly appointed Director of the Agricultural Systems Institute (ASI) and he assumed office on 1 September 2020. Dr. ‘Gil’ Villancio, is an Associate Professor V at ASI and handles courses in Agricultural Extension and Communication, Community survey and planning; Community organization; and Innovations and Entrepreneurship in Agriculture.
He holds a Ph.D degree in Community Development from the University of the Philippines Los Baños. He earned his Master’s degree in Agricultural Economics from the Universiti Pertanian Malaysia, Serdang, Selangor, Malaysia and his Bachelor’s degree in Agriculture (Agricultural Economics) from the University of the Philippines Los Baños.
Dr. Villancio has been the Deputy Director and the Research and Extension Coordinator of the unit from October 2017-August 2020. Since July 2016, he is also the Manager of the Land Grant Management Office (LGMO) administering the 9,600 hectare property of the University of the Philippines in Sierra Madre. He managed the Central Experiment Station from July 2011 to April 2013 and the CA AgriPark , CA, UPLB from September 2010 to April 2013. Further, he has been the Director of the Institute of Agroforestry (IAF) from 2001-2004.
With his milestones in career and leadership competencies, he envisions that ASI will metamorphose into a National Center of Excellence for Agricultural Systems Studies by 2025. To realize this, he has laid out strategic plans for his three-year term focusing on the rationalization of RDE programs, enhancing instruction and curricular programs, professionalization of the Philippine agriculture bureaucracy, advocating agricultural systems approach, institutional partnership and networking, policy advocacy, resource generation, mobilization and organizing for action.
Being expert in his field, he has rendered technical and consultancies as resource person, panelist, facilitator in several seminar and training programs dealing with agroforestry, farming systems development, cooperative development, program planning, agricultural extension and entrepreneurship. Likewise, he has published several articles in refereed journals and has authored/co-authored books, chapter in published books, leaflets and monographs (MCD Caceres and ELA Matienzo)

ASI invites all its students (both undergraduate and graduate students) [...]